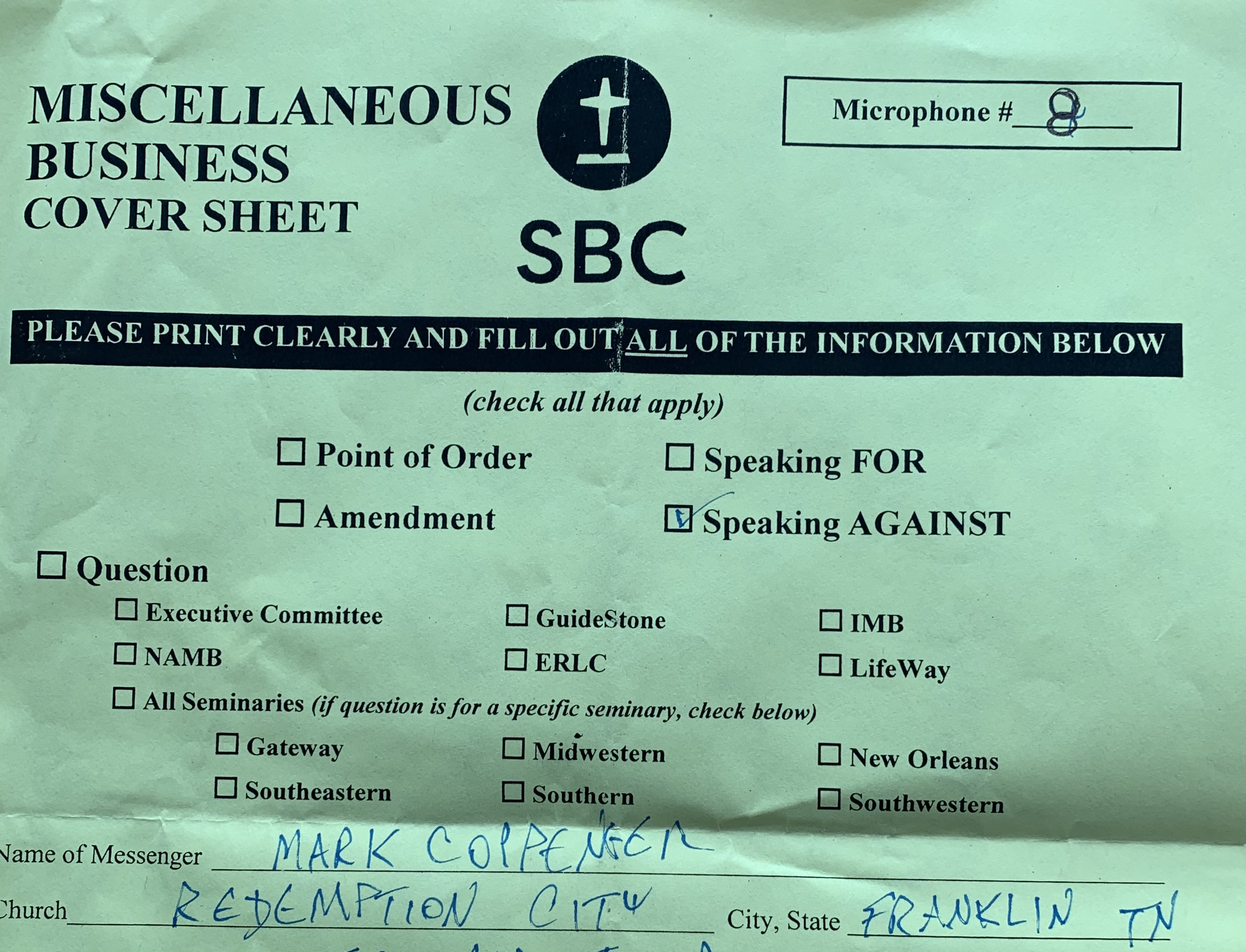 What I Would Have Said

Back in 2020, I wrote a piece, “An Unwarranted Denominational Perp Walk,” in response to what I took to be overreaction to a series of Houston Chronicle articles reporting disgusting instances of sexual abuse in some of our churches. Maybe you can give it a read.

Pressed by then-president Greear and others, we put in place a system to review the performance of individual churches, to see whether they’d fallen so far short of our denominational standards (with regards to their track record on racism or sexual abuse) that they’d forfeited their right to send messengers to our annual meeting. Of course, this went well beyond our action regarding homosexuality in the early 1990s. In those days, we excluded two churches who’d affirmed this perversion, but no one was arguing that those churches in the 2020 Chronicle spotlight had affirmed sexual abuse. Rather, the claim was that some leaders had been negligent in dealing with it promptly, rigorously, and decisively. In the 1990s, we had public records to go on—licenses for a wedding and a new preacher. Investigation was superfluous. But now we’ve taken on the role of detective, a job already staffed at the local level, by both church and community.

In recent days, departing ERLC head Russell Moore inflamed the matter by spewing insults and charges at the Executive Committee under the leadership of president Ronnie Floyd and chairman Mike Stone, who happened to be a candidate for the Convention presidency. It had the hallmark of a favorite Democrat Party tactic—“the politics of personal destruction.” But it struck some as noble and exhilarating, and so they came to the convention freshly primed with alarm and recrimination. Before we gathered in downtown Nashville, Floyd had contracted with an independent agency to check things out, but that wasn’t good enough for some, including Tennessee pastor, Grant Gaines, who stepped up to the mike to push for another layer of scrutiny, a task force to review all the goings on.

When the Order of Business Committee came back the next day with the recommendation that the matter be referred to the EC for consideration, Gaines stepped up to denounce this as a dangerous absurdity—a woefully suspect group checking up on itself. It struck me that his comments were groundlessly insulting, especially since an outside company had just been hired to investigate what was already a doubtful charge. But the sap of suspicion was rising, so he got his overturn-the-referral vote, scheduled for that afternoon.

When he made his no-referral motion, I got up and walked to the closest mike, wanting to speak against it on grounds that we were overdoing it. A nice young man handed me a detailed sheet to fill out (name, address, church, church location, convention lodging, phone number, email address, and text of my proposed remarks). As I struggled to fill out the sheet with a borrowed pen and no writing surface, I saw the time slipping away. Two young women were there to bolster Gaines’s cause, one with a page of handwritten remarks. I figured no one else would be crazy enough to speak against the motion, the implication being that one who did so was an enemy of transparency, scrupulosity, and the protection of the vulnerable, but I scribbled on, with the assurance that my presence and interests at the mike were duly noted, at least by my ground-floor mike tender. But then the vote proceeded along some parliamentary channel, and I returned to my seat.

When the matter came up again around 3:30, I decided to try again. Back I went to my guy and my mike. He told me there was some problem with the wi-fi and that I should try another stand, directing me back and across the hall. So there I walked and handed my original paper to the young man there, explaining that I’d been sent his way by one of his compadres and that I wanted to speak against the motion. Actually, I explained it a couple of times, but apparently to no avail. After standing in line for about thirty minutes, I noticed that he hadn’t punched the “Against” cue button on his rig, so the chair wasn’t even aware I was out there with a concern. After all was said and done, he was apologetic, but there it was.

I got an interesting education in messengerism. Back in the day (1989, 1996-1999), I was one of the presenters on the platform. You got to say your peace and then field a smattering of comments and questions from the floor. Yes, we saw lines at some of the mikes, but I didn’t quite know how hard it was to get a hearing out among the cheap seats. You have to be savvy to insure it, perhaps by setting up camp well before the discussion begins. All said, I probably won’t try again.

As for the flow of discussion, I was struck by the fact that only one objection surfaced from the floor in the three times the matter had come to the fore. I was also struck by the fact that Grant Gaines got to make his appeal three times—at the introduction of the motion; at the challenge to the referral; and at the vote on his challenge—and that the optics were choice, with a tearful, once-abused woman in the frame. As I stood there, waiting for my lose-lose moment, I heard one brave woman say, correctly, that investigating these matters should be left up to the individual churches. And there was someone who said this was his first convention and he wanted to know if the executive committee was a bad lot, to which Ronnie Floyd meekly responded that he was happy to go with whatever the convention decided. And that was it. Boom.

Well, I’m not anybody special, and a host of people didn’t get their time at the mike on this and other matters. But I thought I’d go ahead and give the gist of what I was trying to offer there. Drawing on my 2020 piece, I was going to say I objected on grounds that the problem was being exaggerated and weaponized to attack the decency of good people and good institutions. Doing the math, I would note that, with a total of 28,000,000 Southern Baptists in our churches over the twenty year period in question, and only 220 people convicted of this crime, that would mean one proven crime per 125,000 Southern Baptists. Granting that many could have gotten away with it, I multiplied convictions five-fold to one per 25,000, the equivalent of a dozen megachurches. Sure, there may be more, but there may also be fewer. And yes, of course, any case of abuse and negligence is appalling. But I was witnessing the defamation of our denomination, and I thought we should desist, at least for the present, from running around with our hair on fire to the accusatory chants of critics within and without the convention. The courts of law work with the standard, “innocent till proven guilty,” but we seemed to have flipped that in our zeal to root out malefactors and shun the shameful, if we could just manage to root them out, knowing that they must be out there in substantial numbers in the corners of our congregations and entities.

But, back on the floor: “Time has expired” rang out, and we got our task force.

Statistics can be misleading, e.g., “100% of heroin addicts began on milk.” You have to be circumspect in assembling and unfurling them. Still, they can have a wonderfully antiseptic effect when the virus of popular hysteria is damaging the civic body. Of course, once the narrative gets rolling, most people don’t want to slow down to check out the stats. Polls show that people didn’t have a clue about the numbers Heather McDonald revealed in her WSJ column, “The Myth of Systemic Police Racism,” and environmental zealots, convinced we have way too many people on earth, would be annoyed to learn that the nearly eight billion citizens of this world could fit within the city limits of Houston were they to stand closely side by side. It doesn’t fit their overheated narrative.

As I’ve read through some of the statements thrown out there in recent days, it seems to me that some folks are flirting with slander, and I did a little reading on the legal terms. I came across references to “falsehoods purporting to be facts,” advanced by those who knew or should have known them to be wrong; to the publication or communication of those falsehoods to third persons; to the “damage or harm done to persons or entities” who are the subjects of the claims, with words “exposing them to ridicule, reflecting on their character.”

You may be appalled by my willingness to speak against the establishment of a new task force, but perhaps you can appreciate my efforts to give you another side to the matter so that you may press ahead more confident that you’re not being negligent in your cause, for you have listened to an alternative voice in framing you approach.